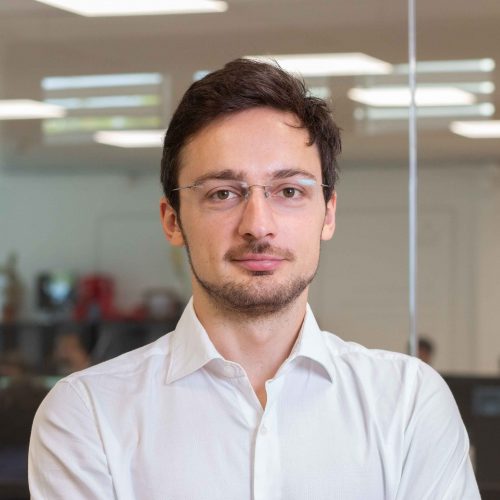 He has an inexhaustible curiosity, eager to learn, enthusiasm and decidedly lateral thinking that allows him to see things in a clearer light and away from the archetypes settled in each company.
At only 16, he began his adventure together with his friend Alberto Silletti: they made a documentary on computer graphics with the theme “The Universe and other forms of life” for the competition “Altrimondi”.
From  2006 to 2009 he was consultant for many companies such as Eismann srl, Eni, Audi and Ulss 16.
In 2009, he founded with Alberto Silletti Uqido, where he is CEO.
Uqido is a software house with two souls, engineering and creative, where the personal attitude of each other is valued and encouraged by offering time for exploring their passions.
He introduced yoga lessons in his company every wednesday morning for their employees, training with experts from all over the world and internal meetings.
His competences allows to deepen themes such as Virtual and Augmented Reality, Start-Up and Innovation, the use of technology in the service for people, computer programming, machine learning and IoT.

All Sessions by Pier Mattia Avesani